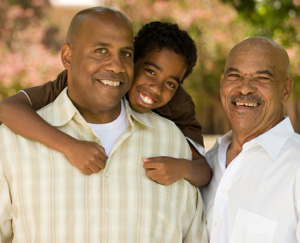 Diabetes mellitus is a disorder characterized by abnormally high blood glucose levels. People with diabetes cannot properly process glucose, a sugar the body uses for energy. As a result, glucose tends to move inefficiently from the bloodstream to the tissues of the body where it is needed. Therefore, at the same time blood glucose levels are elevated, the rest of the body can be starved for glucose. Diabetes can lead to poor wound healing, higher risk of infections, and damage to the eyes, kidneys, nerves, and heart. In type 1 diabetes, also called childhood-onset or insulin-dependent diabetes, damage to the pancreas results in an inability of that organ to make the hormone insulin. Most risk factors discussed in this section do not apply to type 1 diabetes.

Type 2 diabetes is also called adult-onset or non-insulin-dependent diabetes mellitus. In people with this condition, the pancreas is capable of making normal amounts of the hormone insulin. Despite the presence of normal or even elevated levels of insulin in type 2 diabetes patients, however, the body does not efficiently move glucose out of the bloodstream and into the cells. This lack of sensitivity to insulin is called insulin resistance—the hallmark of type 2 diabetes. Insulin resistance not severe enough to be labeled diabetes is sometimes called glucose intolerance and is considered a pre-diabetic condition. Risk factors for glucose intolerance are virtually identical to risk factors for type 2 diabetes. These risk factors are discussed in this section.

The risk of type 2 diabetes increases with age beginning after age 30. Nearly 20% of the U.S. population aged 65–74 has diabetes.1 Pre-diabetic conditions also increase in older people and are thought to contribute to heart disease and other health problems.2

Both male and female infants with low birthweight appear to be at increased risk for eventually developing type 2 diabetes.8,9 The risk is slightly less than double for newborns weighing under five pounds compared to those weighing nine pounds.

Despite the body’s need for insulin when carbohydrate is eaten, diets high in total carbohydrates do not necessarily increase the risk of type 2 diabetes.10,11 However, researchers have found that high-sugar diets may worsen glucose tolerance in animals12 and humans,13 though the amounts of sugar used in these studies in proportion to other foods are much larger than is typically found in human diets. Years ago, one researcher reported an increase in diabetes among Yemenite Jews who had migrated from a region where no sugar was eaten to one in which they ate a diet including sugar.14 However, other factors, such as weight gain, may explain the increased risk that occurred in this group.15 Other studies have found no independent relationship between sugar intake and the development of glucose intolerance.16

Eating carbohydrate-containing foods, whether high in sugar or high in starch (such as bread, potatoes, cold breakfast cereals, and rice), temporarily raises blood sugar and insulin levels.17 The blood sugar-raising effect of a food, called its “glycemic index,” depends on how rapidly its carbohydrate is absorbed. Many starchy foods have a glycemic index similar to sucrose (table sugar).18 People eating large amounts of foods with high glycemic indexes (such as those mentioned above), have been reported to be at increased risk of type 2 diabetes.19,20 On the other hand, eating a diet high in carbohydrate-rich foods with low glycemic index has associated with a low risk of type 2 diabetes.21,22,23 Due mostly to the health-promoting effects of fiber found beans, peas, fruit, and oats, these foods have low glycemic indices despite their high carbohydrate content.

People in many parts of the world who eat traditional diets high in fiber have a low risk of type 2 diabetes.27 Vegetarians, who typically have high-fiber diets, have been reported to be at low risk of being diagnosed with type 2 diabetes.28 While some research has not revealed an association between total fiber intake and protection from diabetes,29,30 specific fiber-containing foods such as peas and beans31 and whole-grain products32,33 have been associated with a decreased risk of type 2 diabetes. Some of these foods (peas and beans) contain a type of fiber that slows down the absorption of glucose into the blood, protecting the body from large sudden increases in glucose; this may explain why they help protect against type 2 diabetes.34 How other foods (like whole-grain products) that do not contain much of this type of fiber help prevent type 2 diabetes is unclear.35

Diets high in fat, especially saturated fat, worsen glucose tolerance and increase the risk of type 2 diabetes,36,37,38,39 an effect that is not simply the result of weight gain caused by eating high-fat foods. Saturated fat is found primarily in meat, dairy fat, and poultry skins and dark meat.

In contrast, glucose intolerance has been improved by diets high in monounsaturated oils.40,41 One of the simplest ways to increase intake of monounsaturates is to add olive oil to the diet instead of other vegetable oils, butter, and margarine.

Chromium plays an important role in both the function of insulin and the control of blood glucose.42 Chromium deficiency causes glucose intolerance, and some, though not all, studies have shown that glucose tolerance improves in nondiabetics given chromium supplements.43 Chromium levels in the human body decrease with age, corresponding with increases in the risk of type 2 diabetes,44 though these two facts are not necessarily related. While increased chromium intake might help prevent diabetes in people with high risk for the disease,45 no research has yet investigated the possibility of this effect. Despite the lack of definitive research, however, many doctors recommend 200 mcg of chromium per day as a way to help reduce the risk of type 2 diabetes.

Most people who develop type 2 diabetes are obese.49 More precisely, people with excess abdominal fat (as opposed to fat accumulation in the thighs and buttocks) have an especially high risk of diabetes, even if their body weight is normal.50,51 Although excess abdominal fat does not stop insulin formation,52 it does make the body less sensitive to insulin.53 Excess weight can induce glucose intolerance in otherwise healthy people,54 and weight loss reverses this problem.55 One study found that people who were not overweight but simply had a strong family history of type 2 diabetes could reduce their risk of becoming diabetic by losing weight.56

Many people who are not diabetic have glucose intolerance—blood sugar levels that are slightly above normal, accompanied by elevated blood insulin levels.60,61 People with impaired glucose tolerance are at increased risk for type 2 diabetes, though only 20–50% actually develop the disease.62 Most studies find that weight loss and/or exercise reduces the risk of becoming diabetic in people with impaired glucose tolerance.63,64

Type 2 diabetes is much more common in Native Americans and is also higher in blacks and Hispanics compared to whites.65

Sedentary people are more likely and exercisers less likely to develop type 2 diabetes.66 This link is not completely explained by the effect of exercise on body weight.676869 Exercise probably helps lower diabetes risk in part by helping to control body fat70 while maintaining or improving insulin sensitivity.71 One study found exercise alone to be as effective as exercise combined with dietary changes in preventing diabetes in people with glucose intolerance.72 Another study found that exercise combined with an improved diet reduced death rates in people with glucose intolerance.73

Both male and female smokers are more likely to become diabetic compared to nonsmokers.74,75