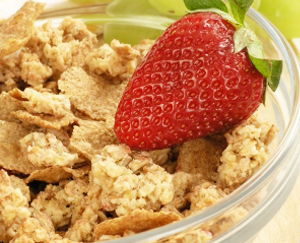 Fiber is known to be one of the most important dietary factors for healthy blood sugar regulation and diabetes prevention. A study in Nutrition and Metabolism supports this, finding that a drink made with a soluble fiber derived from barley, called barley beta-glucan, improved the body’s responsiveness to insulin and improved blood sugar control in people with mildly elevated blood glucose levels.

Fifty overweight or obese adults who had high blood glucose levels but did not meet the criteria for type 2 diabetes participated in the study. They were coached in therapeutic lifestyle changes with a goal of weight maintenance, and were assigned to receive flavored drinks providing 6 grams per day of barley beta-glucan, 3 grams per day of barley beta glucan, or placebo for 12 weeks.

At the end of the trial, the people taking the barley beta-glucan drinks appeared to have better blood sugar control and improved insulin sensitivity compared to placebo:

“This study suggests barley beta-glucan may slow the deterioration of insulin sensitivity for individuals at increased risk for diabetes mellitus,” the study’s authors said.

Previous studies have shown that beta-glucan from oats, oat bran, barley, and barley bran lowers cholesterol levels. The results from the current study add to other evidence that this same beta-glucan might help people regulate their blood sugar more effectively and prevent type 2 diabetes.

The many shapes of barley

Here are some of the forms of barley you can add to your diet: